For those of you that follow me on FaceBook and Twitter, you may have wondered what this movie I’ve been talking about is actually about. For Patrick is a short film that I wrote last summer and shot over two days in Port Townsend, WA two weeks ago. It follows a young couple as they venture off on their own as the world is in a viral pandemic. Each character makes choices that drastically affect their future.

Why would I make a short film? Lots of reasons: I want/need more on camera opportunities. Although there is a huge film scene in Seattle, most people do not use union talent. I strongly believe in making your own opportunities, and so that was a huge factor in my making this film. Also, I wanted to work with some talented friends. And I want to inspire you. That after all is why I do what I do.

Though the reasons for me to make the film were easy, the making of it was/is not. I don’t produce very often because it is so much work. However, being able to apply for film permits, fill out SAG applications, find props and costumes, location scout, all of these things make me a better actor. Why? Because now I have an awareness of what goes in to the final product. I can more appreciate everyone else’s efforts and really know the value of my own work.

This has been a tough project, but I have learned so much and feel better prepared for the next chapter of my career.

I’ll be writing two other parts on the process of this film and on its online release at www.forpatrickmovie.com 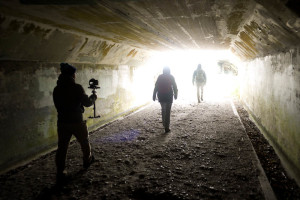 Making a Movie When You Have a Mental Illness