I going to take a short break from talking about For Patrick, to talk about a very special project I shot last Saturday.

It was in January that one of my dear friends and biggest inspirations, Wonder Russell, emailed me asking if I wanted to do a project with her. Um… YES. Was my response. She wrangled together six Seattle actresses to all explore the theme of Revelation. We had numerous rehearsals along the way that were solely there to help us explore our theme. We worked on expressing emotions then we worked with movement experts: it was thorough and freeing.

Now, the theme was revelation, but we all got to decide what our scene would be. We would have about one minute of screen time to show our scene that featured a revelation. Early on Wonder sent us this song for inspiration. The first thing that came to my mind was a young girl trapped and being freed by the demons within her. Through my life I have found freedom by accepting the ugly parts of myself so this became a very personal scene.

After all the different modes of rehearsal, my scene turned into something else: an homage to silent film. Silent films are one of my greatest inspirations and reasons I love cinema as much as I do. So much was told with no words at all. And as we were not going to have sound in the scene, this was a perfect match for me. I was getting to live out a life-long fantasy. Of course in a silent film you need a pure young ingenue, so that was where I started. She comes into an enchanted forest and finds a magical cloak. She puts it on and turns into an evil queen! Boom.

Come the shoot day, I showed up with an idea of the scene but not much about how the costumes and set would really turn out. Well, they turned out better than I could have imagined. Kari Sue the makeup artist was incredible, especially for making the evil queen come to life: 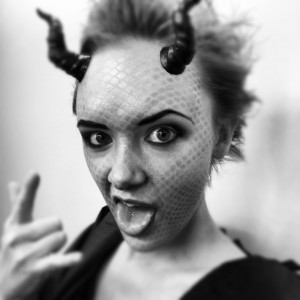 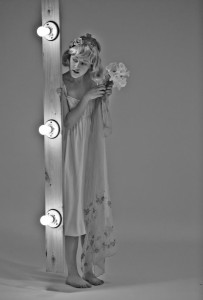 Fun fact: I played Juliet in that dress! For only one minute that will be the final cut, we shot for about four hours. I loved every minute of it. I don’t think I’ve had that much fun on set. After I was wrapped I didn’t want to leave. So I stuck around to see the next actress film her scene.

I cannot wait for you all to get to see Revelations. It is definitely the most magical thing I have ever done. The cast, crew, and Wonder at the helm was an all-star team. Like the film on FaceBook and visit the website for updates.

I love my job so much.

Advice to a Young Actor